NEW YORK TIMES bestselling author Jeff Lindsay mastered suspense with his wildly addictive DEXTER series. Before that, however, there was former cop and current burnout Billy Knight. When a hostage situation turns deadly, Billy loses everything—his wife, his daughter, and his career. Devastated, he heads to Key West to put down his gun and pick up a rod and reel as a fishing boat captain. But former co-worker Roscoe McAuley isn’t ready to let Billy rest.

When Roscoe tells Billy that someone murdered his son, Billy sends him away. When Roscoe himself turns up dead a few weeks later, however, Billy can’t keep from getting sucked back into Los Angeles, and the streets that took so much from him.

Billy’s investigations into the death of a former cop, and his son, will take him up to the highest echelons of the LAPD, finding corruption at every level. It puts him on a collision course with the law, with his past, with his former fellow officers, and with the dark aftermath of the Civil Rights Movement. Jeff Lindsay’s considerable storytelling gifts are on full display, drawing the reader in with a mesmerizing style and a case with more dangerous blind curves than Mulholland Drive. 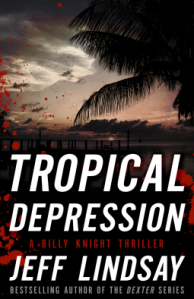 author educator book reviewer for authors reading and writing staff developer Book reviewer for manic readers, ijustfinished.com book pleasures and authors upon request blog tours on my blog and interviews with authors I am the author of five published books. I wrote three children's books in my Bertha Series and Two on Alzheimer's. Radio show talk host on Red River Radio/Blog Talk Radio Book Discussion with Fran Lewis the third Wed. of every month at one eastern. I interview 2 authors each month feature their latest releases. I review books for authors upon request and my latest book Sharp As A Tack or Scrambled Eggs Which Describes Your Brain? Is an E book, Kindle and on Xlibris.com Some of the proceeds from this last book will go to fund research in the area of Brain Traumatic Injury in memory of my sister Marcia who died in July.
View all posts by Just Reviews by:gabina49: »
« Aftermath Lounge
Death in the Family Business »

One thought on “SPOTLIGHT: TROPICAL DEPRESSION”