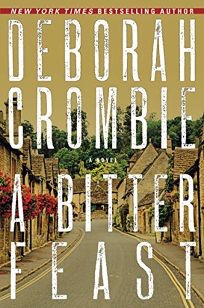 Two chefs are at the heart of this novel as one has secrets to hide and the other returns and haunts someone from his past. Things take on a dangerous tone from the start when Duncan and Gemma Kincaid are on the scene hoping to spend a quiet time with friends. Detective Superintendent Duncan Kincaid and his wife DI Gemma James are at the heart of this novel as they have accepted an invitation to stay at Beck house the home of a close friend DS Melody Talbot and her rich parents. Ivan and Lady Adelaide Talbot are the parents and Viv Holland had agreed to create a luncheon for many bloggers, food critics and guests that would prove why she is so revered as a chef.

Fate sometimes plays an unusual hand and this visit turns deadly even before it begins. Duncan and Gemma split up taking different cars to their location and a fatal accident occurs. The fate of three people is in the hands of someone unknown as the two cars crash into each other, Duncan is hurt, and two others are killed.

Helps readers understand more with the flashbacks to her time working with him and the situations that became rather tense. Why did he really come to see her and why did he why did he want her to come back to work for him or was he there for another reason?

Nell was a diner at the Lamb and after leaving she saw Fergus and realized he needed medical help and picked him up on the way. As a hospital administrator she knew the signs of medical stress and he died at the scene but not just from the crash. He apparently was poisoned before the crash enter Duncan and Gemma who get in on the investigation.

When Grace, Vivian’s daughter learns about Fergus’s death why does she blame her mother?

The luncheon had to go off and Gemma and her son, Kit pitched in but what about Nell’s dog Bella? Who would care for her? Mark Cain gave her to Nell but there is a hidden secret yet to be revealed about him.

DI Colin Booth is running the investigation and Duncan has been enlisted to assist. There interactions and collaborative methods helps to drive the plot and solution forward.

Kit is a strong character and when needed to temper Grace and distract her he’s prime for the task. Melody is distracted with her issues with Doug and her tenuous relationship with Andy.

Jack and Viv are close friends even though he’s her bartender. But, guilt rides her when he is hit by a car walking home and the result is another murder.

Things get even more tense as Grace once again lashes out at her mother leaving readers to wonder why their relationship is so volatile.

Duncan and Gemma each take part in trying to solve the murders using contacts and hopefully concluding.

Tensions rise and secrets are revealed and the author Keri’s us in suspense until the final reveal.

When Grace learns the truth about Fergus and they connect, things became tense for her relationship with Viv. Someone was instigating her against her mother and at 11 she believed the lies. But Jack’s murder would change the course as someone close to the pub owned the car in question.

With Duncan and Booth questioning Ibby and Viv and Gemma having an honest talk plus Melody learning a harsh betrayal of someone close to her parents the final reveal will shock readers as one 11 year old Grace proves resourceful and smart and Kit uses his ingenuity to hopefully find her knowing she’s in danger. The final flashbacks will tie it all together and the ending will leave you wondering what is next for Viv and what will the future hold for her restaurant as it all started with one Bitter Feast. Sometimes it’s the unexpected that keeps readers enthralled and as the author ties up the loose ends, we learn more about the rationale behind the murders, the justification of the person who committed the murders and in the final analysis what will the fate of this person be? How will that affect Viv and what was the real reason Fergus wanted her back? When the truth is told, and Viv realizes she might lose it all someone from the past might come into her present and hopefully save it all, but will she agree? Relationships change, forgiveness and understanding are part of the solution and one young 11-year-old child must face the past and hopefully understand things better in the present. A great book that deals with friendship, trust, betrayals, loyalties, honesty and some great and fantastic cooking that anyone reading the book would want the recipes for as they come alive on the page as the author describes them.

Sometimes anger , revenge and greed take hold and someone you trusted betrays it all and places your child and business in jeopardy. When Duncan, Booth and Gemma piece it together you won’t believe else takes action when Grace overhears something and is witness to an attempted murder but will she get free and will she be found?

An intricate plot and beautifully executed as author Deborah Crombie keeps us glued to each page until the very end.

Strong plots with multiple storylines and characters that are believable, and one 11-year-old girl named Grace and teen named Kit who stole the show.