Lady Alexandria Cassel scorned London’s frivolous social whirl, seeking adventure as a stowaway aboard a merchant ship. Drake Barrett was the vessel’s powerful captain—and a cynical duke who disdained a noble’s shallow life. At sea he revealed neither his origins nor his wealth, and to Alexandria he was simply a man who made her cool reserve fly with the winds… whose desire for her was as wild as the ocean they sailed.

Caught in the crossfire of war, they were shipwrecked on an idyllic island, where they tasted perfect passion… and tenderness. But Drake dreaded the day of their rescue—when his love would discover that the virile man she adored was at the pinnacle of the aristocracy she despised. Hardly did they suspect the base treachery that would soon threaten them… and the dangers each would brave to join forever their hearts and lives!

With her signature style, Kane creates unforgettable characters and confronts them with life-threatening danger. As a master of suspense, she weaves them into exciting, carefully researched stories, pushing them to the edge—and keeping her readers up all night. Kane lives in New Jersey with her husband and family. She’s an avid crossword puzzle solver and a diehard Yankees fan. Otherwise, she’s either writing or playing with her Pomeranian, Mischief, who does his best to keep her from writing?

Kane’s beloved historical romantic suspense novels include My Heart’s Desire, Samantha, The Last Duke, and Wishes in the Wind.

With a worldwide following of passionate readers, her books have been published in more than twenty languages.

Sometimes it takes a strong willed woman to teach a rugged and hardnosed man who is boss. Captain Drake Bennett will never be the same after his close encounter with Lady Alexandria Cassel. Deciding to stow away on his ship and find her way to York, little did they both expect that the sparks would fly and the chemistry would ignite a romance that is right out of a magic fairytale but not quite yet. Finding her on his ship and demanding to know the meaning of her presence only got her dander up and her response was definitely not what a submissive and frail young woman of 17 would ordinarily say. Offering to help in any way on the ship and knowing quite a bit about sailing, little did she expect what he offered as her lodgings for the months on board and the expectations he requested as a result of paying her passage. Money does not entice him but she does and the end result even after one week aboard would shock the “ton” and cause her to be considered damaged goods even though nothing happened. Required to wear the clothing of the men on the ship he was afraid they might be tempted in more ways than one except for his right hand man Smitty. But, Drake was hiding his true identity from her and never revealing his title as a Duke until the moment was right or in this case not quite right. As the men on the ship get to know her she becomes an important part of their lives with her kind ways and a lovely smile. Drake is not impressed and although they have a great connection their time on the ship becomes treacherous as the Americans attack their ship and their weapons are drawn but something happens to the gunpowder and the ship is lost at sea but not before she returns to York and is greeted by her angry father. Not pleased with her he demands that Drake marry her or be called out. Not wanting to do as her father says she rebels but in the end in order to save face for her family and a father who could care less about what she does and has become she marries Drake. Going back to England on the ship is when they find themselves in danger and on a deserted island. But, Smitty his right hand man and his crew manages to find them and bring them safely home to England where things drastically change for Alex when she learns just who she married and his station in life. Anger wells up inside of her but is tempered when he learns his father is dying and things have to be handled before settling with Alex in their life together and explaining why he kept the truth from her. The chemistry heats up even further and if she lived during our time I imagine she would be an advocate for women’s rights and women’s lib. Touch, tenacious, persistent and downright hardheaded at times Alex finds herself in a different social set when she meets Samantha his sister and some of his close friends that would still like to take Drake for their own. Married or not these women do not care but something is sinister about his brother Sebastian as you hear him talking with one of the guests at the ball he arranged to welcome her into the family and you learn about his blackmail scheme and you wonder just what he might have to do with the fact that Drake is being targeted by a killer.

Friendships, loyalties, deceits, blackmail and treachery are all brought to light in this romance/Mystery novel with a single twist at the end. Author Andrea Kane brings us back to the time when England and America were at odds, the war of 1812, the deaths and two people brought together by fate, or just by chance as they decide just what defines their Heart’s Desire.

Drake is often hardheaded too and when he witnesses his wife outwardly flirting with his male guests he reads her intentions wrong and decides to get foxed or drunk. Having his way with her and treating her like yesterday’s old milk, Alexandria strikes back in the only way she knows how. But, rather than tell him the news that he was going to be a father he leaves for three days to try and learn just who might be trying to kill him and why but when he returns the scene is terrifying and the end result might mean someone’s death. Fighting off someone from trying to attack and rape her Drake comes in and takes matters into his own hands as he learns the hidden truth about someone close to him. Family loyalties are broken, lies are revealed and a plot to take his life foiled but not before another murder is revealed. Will Alexandria and Drake finally realize that they belong together? Will he understand that she is different from other women and only seeks him and his love? Will they both realize in due time that their love is stronger than the sea and all the money in the world? Will they sail away on another ship and have more adventures in the future? This is the twenty fifth-anniversary edition of this romance/mystery novel and you the reader might decide that reading this book is your very own Heart’s Desire. 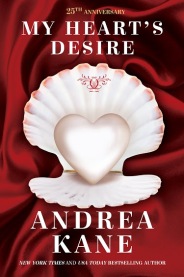 author educator book reviewer for authors reading and writing staff developer Book reviewer for manic readers, ijustfinished.com book pleasures and authors upon request blog tours on my blog and interviews with authors I am the author of five published books. I wrote three children's books in my Bertha Series and Two on Alzheimer's. Radio show talk host on Red River Radio/Blog Talk Radio Book Discussion with Fran Lewis the third Wed. of every month at one eastern. I interview 2 authors each month feature their latest releases. I review books for authors upon request and my latest book Sharp As A Tack or Scrambled Eggs Which Describes Your Brain? Is an E book, Kindle and on Xlibris.com Some of the proceeds from this last book will go to fund research in the area of Brain Traumatic Injury in memory of my sister Marcia who died in July.
View all posts by Just Reviews by:gabina49: »
« The Mysterious Vanishing Place
In the Service of the Boyar »

One thought on “spotlight Andrea Kane”