Dallas private eye Ed Earl Burch is an emotional wreck, living on the edge of madness, hosing down the nightmares of his last case with bourbon and Percodan, dreading the next onslaught of demons that haunt his days and nights, including a one-eyed dead man who still wants to carve out his heart and eat it.

Burch is also a walking contradiction. Steady and relentless when working a case. Tormented and unbalanced when idle. He’s deeply in debt to a shyster lawyer who forces him to take the type of case he loathes — divorce work, peephole creeping to get dirt on a wayward husband.

Work with no honor. Work that reminds him of how far he’s fallen since he lost the gold shield of a Dallas homicide detective. Work in the stark, harsh badlands of West Texas, the border country where he almost got killed and his nightmares began.

What he longs for is the clarity and sense of purpose he had when he carried that gold shield and chased killers for a living. The adrenaline spike of the showdown. Smoke ‘em or cuff ‘em. Justice served — by his .45 or a judge and jury.

When a rich rancher and war hero is killed in a suspicious barn fire, the rancher’s outlaw cousin hires Burch to investigate a death the county sheriff is reluctant to touch.

Seems a lot of folks had reason for wanting the rancher dead — the local narco who has the sheriff on his payroll; some ruthless Houston developers who want the rancher’s land; maybe his own daughter. Maybe the outlaw cousin who hired Burch.

Thrilled to be a manhunter again, Burch ignores these red flags, forgetting something he once knew by

Someone wanted Bart Hulett gone. Well, not just someone a lot of someone’s. Rancher and landowner of some valuable property he was being waltzed and hopefully convinced to sell for 250 million dollars. But Bart said no, and these developers are not in the habit of taking no hit answer and someone well more than one someone would do the deed. A fire that was suspicious, but the sheriff thought an accident and did not want to get involved. On the take and into the drug cartel mob run by Garza he arrested anyone that was his competitor but turned a blind eye for the rest.

Ed Burch was once a detective with a gold shield and when Bart is killed, he’s asked by his corrupt cousin to find out who killed him.

The brothers in charge of the development company won’t stop and Chuy Reynolds who was hired to take him out. There are several female characters whose actions are graphically created and whose voices are heard in flashbacks which are quite frequent in this novel. Innermost thoughts are also heard using italics and Burch’s nightmares and fears in his dreams from the wars he fought when in the army add to the suspense and getting to know him.

Each scene is violent at times and the narco bosses and the sheriff are well protected to a point as the author draws us into the worlds of the Hulett family members and the other villains: Garza , the sheriff, several female characters that you don’t want to tangle with and Doggett . There are so many that wanted him gone and each for money and power.

Butch sets out to find the killer and every step of the way he is either arrested, beaten, tasered or abused by law enforcement. The fact that the sheriff is corrupt and it’s no secret leaves you wondering just what if any justice is enacted.

Burch is working for a shyster lawyer and watching cheating husbands is his job. A wife learns her husband has strayed and the proof is in the pictures freeing her of all monetary obligations. But deep down he wants his shield back but his mental state throughout the novel explains why that would be deadly.

Burch and Doggett form an alliance and Burghardt met Deke and wanted his asking price. Easy money for him and large enough to take this risk and disappear forever. Things turn deadly and shots are heard and once again the author lets Burch’s mind tally a flashback scorecard and we hear the events in his eyes and slow motion.

Malo Garzo is dangerous and finds the pain that others get inflicted gave him something to regale in. Boelcke is his lawyer and just how connected to Garzo was he. No one seemed above criminal activities including Burch. Stella Rae was part of the reason that Burch was investing an errant husband, then let’s not forget Gyp his cousin and Roca the man who was hired to take out Bart. Angry people that did not get paid for their work and one man whose land started it all. The High Sheriff is crooked and needs to take the fall, but the author allows readers to think that this might be the plot of the next book. The Bryte Brothers don’t play fair and one of them helped take out Bart. However, Burch did have an ace in the hole Carla sue and then he must decide what the Next Lousy Choice would be. Characters that are unique in many ways and yet some that fit the typical mobster. Deaths occur but do you feel sorry for those that fall? What about Burch as a PI why so unorthodox and why so many flashbacks into his past. Even the scenes in the present were written in italics and you can feel the tension within him before the explosion occurred. A book about money, power, greed, revenge and one man named Burch who was bent on finding the truth at all costs. 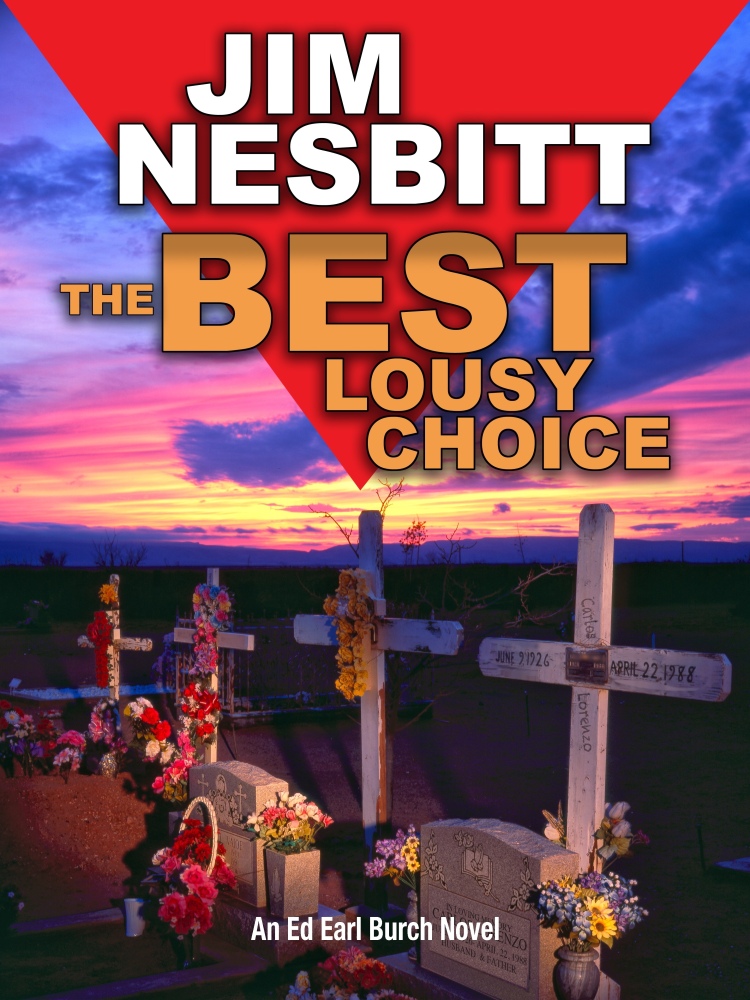 author educator book reviewer for authors reading and writing staff developer Book reviewer for manic readers, ijustfinished.com book pleasures and authors upon request blog tours on my blog and interviews with authors I am the author of five published books. I wrote three children's books in my Bertha Series and Two on Alzheimer's. Radio show talk host on Red River Radio/Blog Talk Radio Book Discussion with Fran Lewis the third Wed. of every month at one eastern. I interview 2 authors each month feature their latest releases. I review books for authors upon request and my latest book Sharp As A Tack or Scrambled Eggs Which Describes Your Brain? Is an E book, Kindle and on Xlibris.com Some of the proceeds from this last book will go to fund research in the area of Brain Traumatic Injury in memory of my sister Marcia who died in July.
View all posts by Just Reviews by:gabina49: »
« A memoir that you will never forget
RED METAL »

2 thoughts on “The Best Lousy Choices”