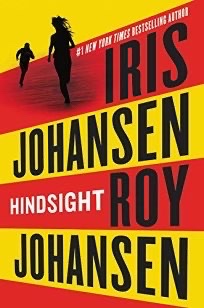 Being blind as a child never stopped Kendra Michaels from using her other senses to help her navigate the world. A doctor found a way to restore her sight and her life drastically changed as she uses her insight, her ability to see things at crime scenes most would not, tough and often brash somehow, she manages to strike some unique chords. Sent to Afghanistan to work along with Adam Lynch to take down a dangerous killer named Brock, she’s injured slightly and the next thing she learns she is being shipped back to the states. Angered and furious she has little time to brood when called to the Woodward Academy in Ocean California a school for the physically disabled to investigate the murders of survival skills teacher Elaine Wessler and groundskeeper Ronald Kim. Their deaths are a mystery and why would anyone kill them. But Kendra is headstrong, and the police seem to want to keep her involved as special agent Michael Griffin wants to use her extraordinary perception skills . Things get tense when Kendra can assess the crime scenes in such detail and finds clues that the police and an FBI missed. But someone wants her gone and placed a bomb in her car but it’s a fake but nonetheless a warning which of course she dies not heed. Added in Elaine was training a guide dog named Harley whose personality takes getting used to and she’s sharing with her best friend Olivia. Harley howls and has been upset since the little boy who he belonged to die as a red of a gas explosion and his howling is scaring the students which is why Olivia took custody of him along with Kendra. But this is just the beginning when she decides to seek out Elaine’s ex-husband and finds him on his rooftop with his throat slit and she barely escapes the assailants.

Kendra is saved from even more injuries when Jessie Mercado enters the picture to escape the killers. No one would want to mess with these two, but things get even more tense when Lynch shows up and is all contrite and apologetic for sending her home and wants to work with her to find the killers. The sparks fly, the chemistry between them is strong but what they do when finding a possible link to one of the killers of Elaine’s ex is priceless.

The tension between Lynch and Kendra is strong and the link to the killers has to do with Harley and the abuse that was inflicting him, learning more from his trainer and the vet, dealing with having to find the two men led to an intricate web and paths leading in many directions as Kendra, Metcalf, Griffin and Lynch follow a trail of leads that hopefully will catch Justin Hayes who was listed as dead but is very much alive. But Lance Dietrich his partner has other plans for him in mind as a dangerous killer who eliminated others before the result will surprise readers, angers Kendra and leaves her more than just banged up and fuming. Insisting to be part of the investigation or at least hearing what they learn about Dietrich only placates Kendra, Lynch aiding to sooth her pain and Olivia giving her own orders to them all. So why is she silent and why does Jesse realize something is off with Kendra? Added in we meet John Kim , Mr. Kim’s grandson and Ariel a smart kid whose hacking skills reveal information about Elaine and more to Kendra.

A killer is still at large and another murder at the school of a big-time drug dealer found dead. Why is the school targeted? What about the safety of the students? A killer has his sights on Kendra, but will she get away before he strikes again?

As the killer threatens Kendra and the stakes are high the lives of the students are at stake and contacts are used but will Lynch and Kendra stop what this killer has planned before it’s too late? Just how far will Kendra go to avenge the deaths of Elaine and Mr.Kim?

A plan that was risky and the hidden truth behind what Dietrich had planned as one powerful drug lord hoped to escape to safety but Kendra comes face to face with him, a plan that counseling backfire and the security and fate of the school on the line. An ending that’s filled with the unexpected as authors Iris and Roy Johansen set the bar high as Kendra, Lynch Olivia and our newest hero Harley face the hope of taking down one man whose visions blindsided so many because they understood the events that happened only after they occurred and got caught in dangerous webs in hindsight and paid closer attention to the danger before it happens. The ending will let you wonder where Lynch and Kendra will wind up next and the final pages will keep you in suspense. Once again Kendra is tough, obstinate and the electricity between her and Lynch is hotter than an inferno. When Olivia realizes the truth behind what is happening at the school and her attachment to Harley will she keep him, or will she decide to find him a different home? Kendra is impetuous and the final fate of the school is up in the air as the head wants to close it, the funding will stop, and the only hope is to find a way to get public support and someone help pay the bills. Some endings will change into new beginnings as the authors leave us wondering what the fate of the school will be and will Kendra and Lynch wind up together or will their paths separate once more?

author educator book reviewer for authors reading and writing staff developer Book reviewer for manic readers, ijustfinished.com book pleasures and authors upon request blog tours on my blog and interviews with authors I am the author of five published books. I wrote three children's books in my Bertha Series and Two on Alzheimer's. Radio show talk host on Red River Radio/Blog Talk Radio Book Discussion with Fran Lewis the third Wed. of every month at one eastern. I interview 2 authors each month feature their latest releases. I review books for authors upon request and my latest book Sharp As A Tack or Scrambled Eggs Which Describes Your Brain? Is an E book, Kindle and on Xlibris.com Some of the proceeds from this last book will go to fund research in the area of Brain Traumatic Injury in memory of my sister Marcia who died in July.
View all posts by Just Reviews by:gabina49: »
« Treason Stuart Woods
Bon Voyage to Murder: Fiona and Nathan are back »